Luxembourg City is the winner of the European Union Access City Awards 2022 for its outstanding efforts to become barrier-free and accessible to all people with disabilities. Around 87 million people in the EU live with a disability.

The announcement was made on 3 December at the annual European Day of People with Disability event of the EU Commission.

Helsinki and Barcelona scooped the second and third place respectively. A special mention went to Porto for improving the accessibility of its train stations.

Judges also awarded Leuven for its actions in “mainstreaming accessibility and inclusion in the digital area” and Palma for “improving access to the physical environment, including beaches and parks.”

A total of forty cities, all with more than 50,000 inhabitants,  competed this year to demonstrate how accessibility has become a priority and has been integrated in their plans.

Before wining the top prize this year, Luxembourg City received a special mention in 2015 and placed third in the 2018 edition of the European Union Access City Awards.

For Patrick Goldschmidt, the Alderman in charge of Integration for People with Special Needs in Luxembourg City, integration and inclusion are pillars of the municipality’s accessibility policies. “Inclusion is one of the bedrocks of our urban planning,” he told the audience at the award ceremony.

Luxembourg City’s free-for-all public transport is a way to remove economic barriers, Goldschmidt said. The municipality isn’t limiting its actions to new projects but is also adapting existing infrastructures to respond to specific needs, he added.

People with a visual impairment can more easily access public transport in Luxembourg City thanks to bluetooth and other digital technologies that allow them to receive messages with live information such as approaching a bus stop.  The concept of accessibility for all extends to urban planning, roads and other infrastructures.

When it comes to urban planning, the Finnish capital goes a step further by incorporating accessibility to all its projects, starting from their early phase. “People with disabilities can talk beforehand with architects and other planners who are designing buildings,” Anni Sinnemaki, Deputy Mayor for Urban Environment at Helsinki’s City Council, told the audience last week. 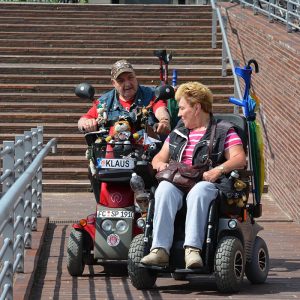 Sinnemaki highlighted the importance of including natural and green areas and how  Helsinki completed a long natural trail, fully-equipped with accessibility features.

The city’s overall goal is to to be accessible to everyone: citizens with disabilities, the elderly, those suffering from long-term sicknesses as well as people using walking frames or pushing child strollers.

Barcelona’s detailed analysis of accessibility in its public spaces is one of the reasons the Spanish city was awarded the third place.

Joan Ramon Riera, President of the Municipal Institute of People with Disabilities in Barcelona, said the city “has a strong commitment to accessibility policies and has developed several initiatives to implement it.” Actions include equipping four of the city beaches with bathing aids for people with disabilities and making accessible 92% of Barcelona’s metro stations, he explained.

The Council told Eurocities Porto’s application was highlighted because of the investment made on public transport and mobility, and the effort on improving accessibility of the rail stations and vehicles.

Ricardo Valente, Councillor for Finance, Economy, Employment, Tourism and Commerce said in his speech that Porto wants to be a city for everyone in spite of nature making that goal particularly challenging because it forces to “bypass the natural and morphological conditions of the ancient city,” which lies near the sea and dates back to 275 BC.

“We have been implementing different measures to ensure equal access for all. Not only physical but professional, social and cultural as well. We are very proud but, at the same time, aware of the challenges we have ahead of us,” declared the Council to Eurocities.

The municipality is nevertheless determined, promised Valente. “We never surrender and we turn adversities into opportunities,” to ensure accessibility for senior citizens and people with reduced mobility.  “Above all, we want to guarantee a more equitable and inclusive quality of life in the city. Fortunately, this has been recognised,” the city official said.

With its special advisory board dedicated to accessibility and a long-standing commitment to finding creative solutions that meet people’s needs, the small city of Leuven was praised for its big accessibility accomplishments.

The special mention at the EU Access City Awards 2022 not only appreciates all the work done so far but also inspires Leuven to fine-tune its future accessibility plans, Corneillie remarked.

Cities for a more equal society

According to the EU’s Equality Strategy for the Rights of People with Disabilities 2021-2030, 52% of people with disabilities feel discriminated against. Against this background, municipalities’ efforts are essential to create a more equal society.

Since 2010, the European Union Access City Awards have been working toward raising awareness of the challenges faced by people with disabilities and promoting initiatives in cities with more than 50,000 inhabitants.

The EU Commission additionally promotes the development of accessibility through its European Capital of Smart Tourism award.